This year’s Members’ Show and Tell produced an enthusiastic flurry of fascinating contributions from more than 20 members. The variety of entries reflects the Society’s broadening area of interest, withexamples from South America, Africa and Europe as well as from our more traditional focus on Asia.

Although the online format was forced upon us, it has resulted in two benefits: one is that members did not have to carry their precious pieces from home to the AGM venue, which may be the reason we have a greater number of larger items, especially rugs, than usual. Secondly the commentators have had longer to think about our responses this year.

Not being able to gather in a convivial atmosphere with refreshments and the ability to handle items is a loss. To get the true sense of scale, technique and matters tactile we very much hope we will be able to revert to the normal practice next year.

As usual, the Show and Tell includes several contributions which might just as easily have fallen under the heading ‘Show and Ask’. This makes for a pleasingly interactive event, and we do hope members will feel free, after browsing the delightfully intriguing contributions, to share their comments. 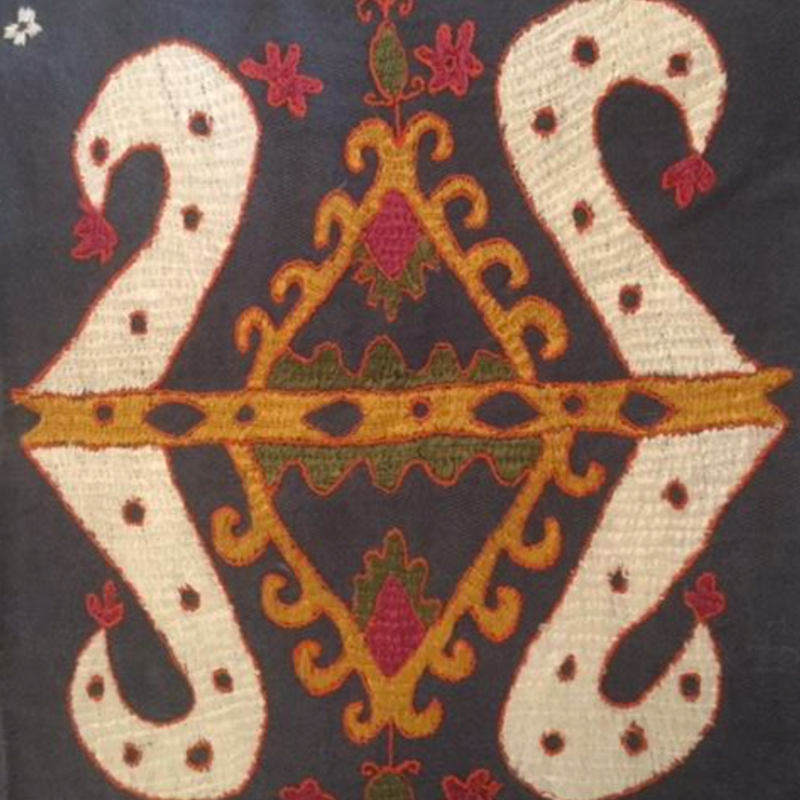 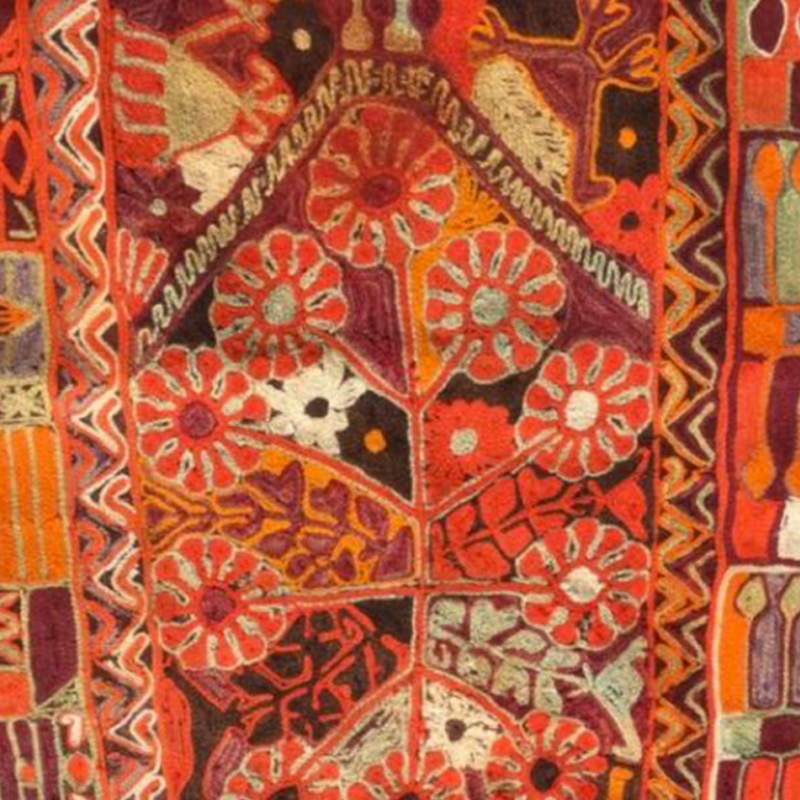 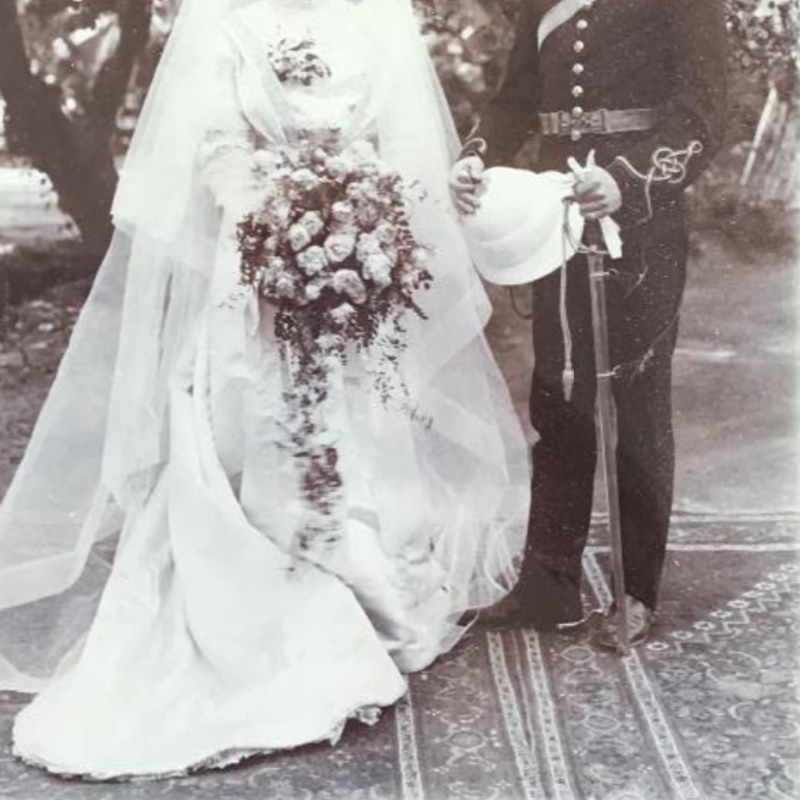 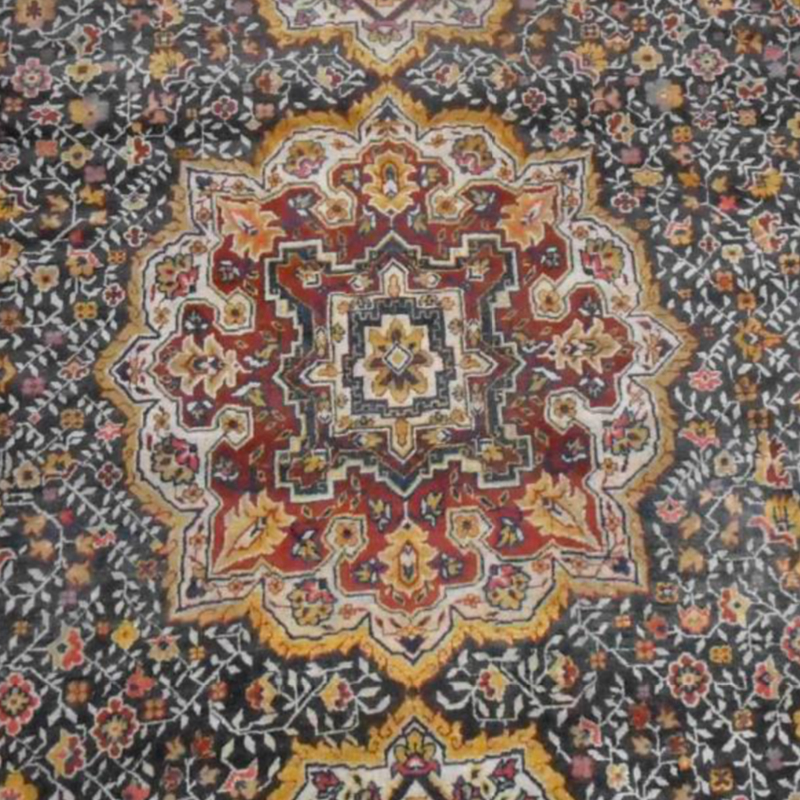 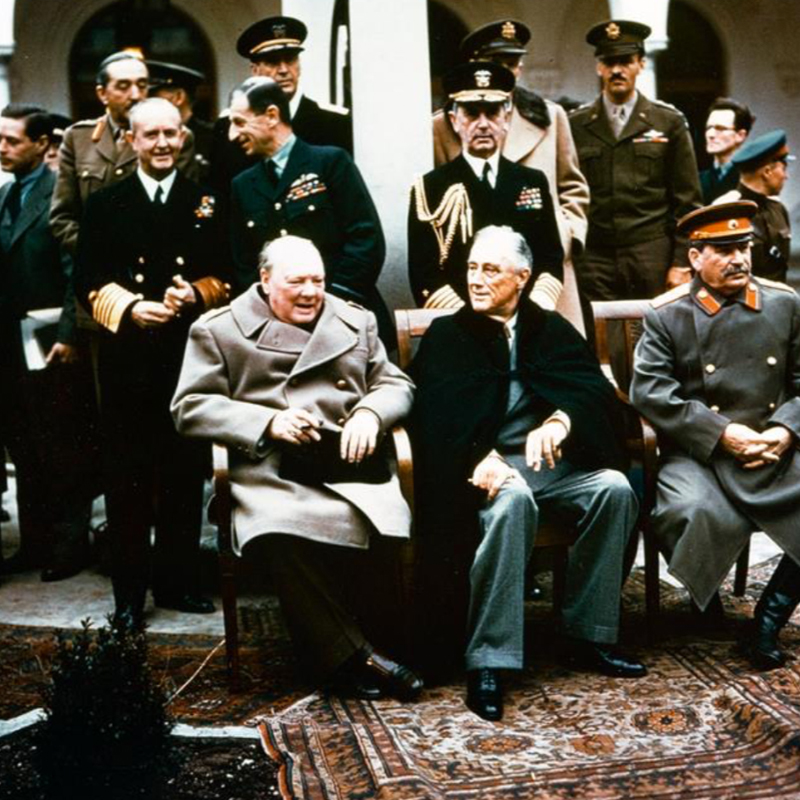 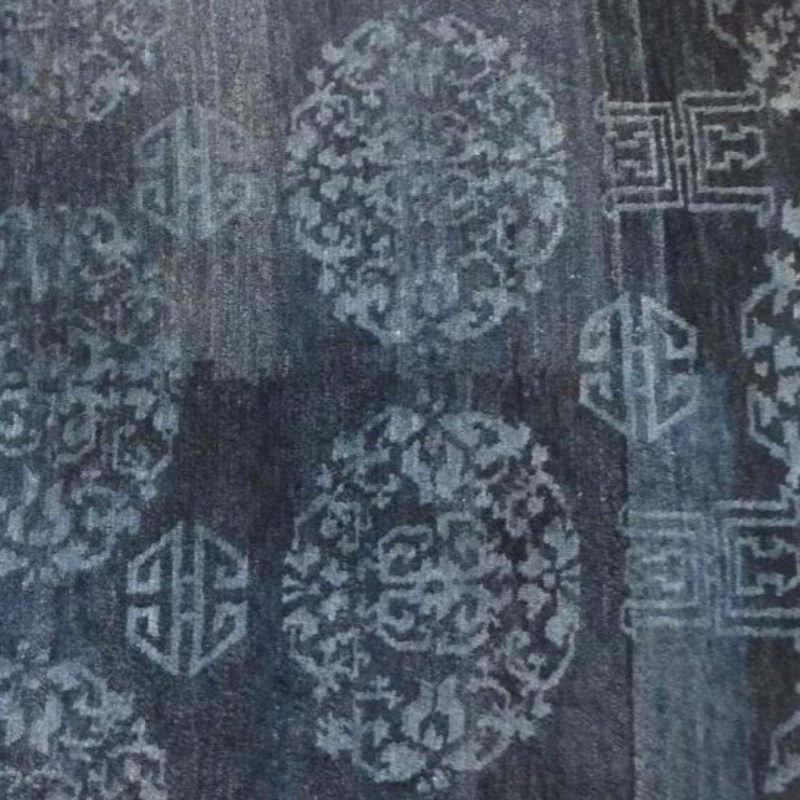 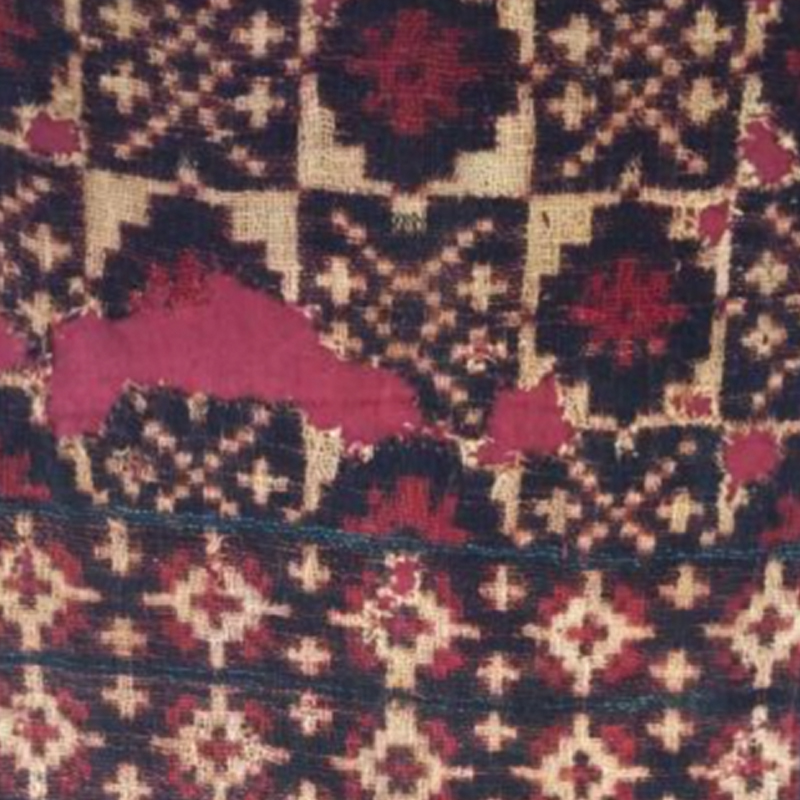 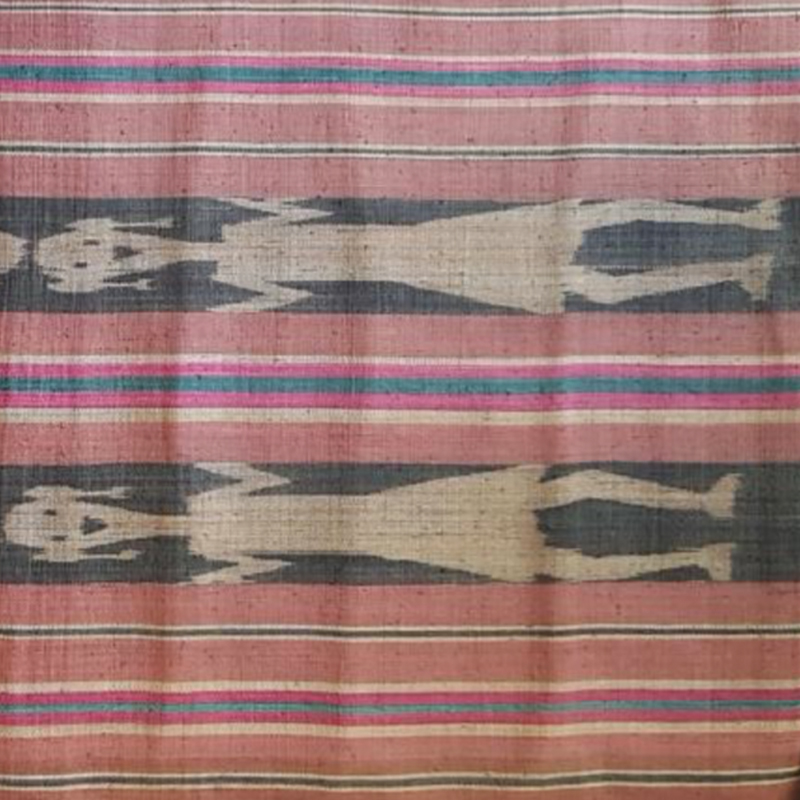 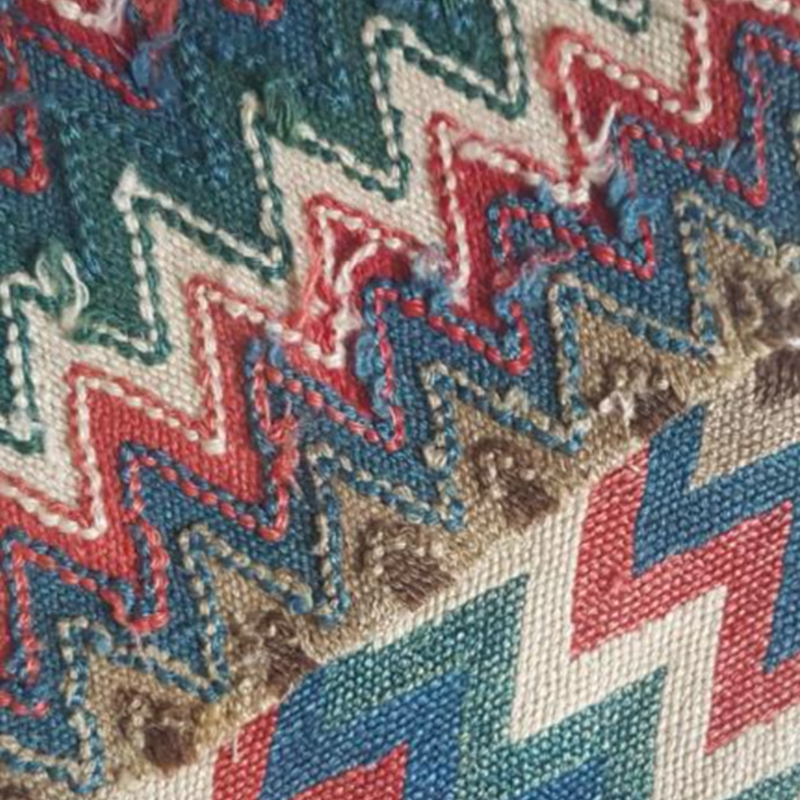 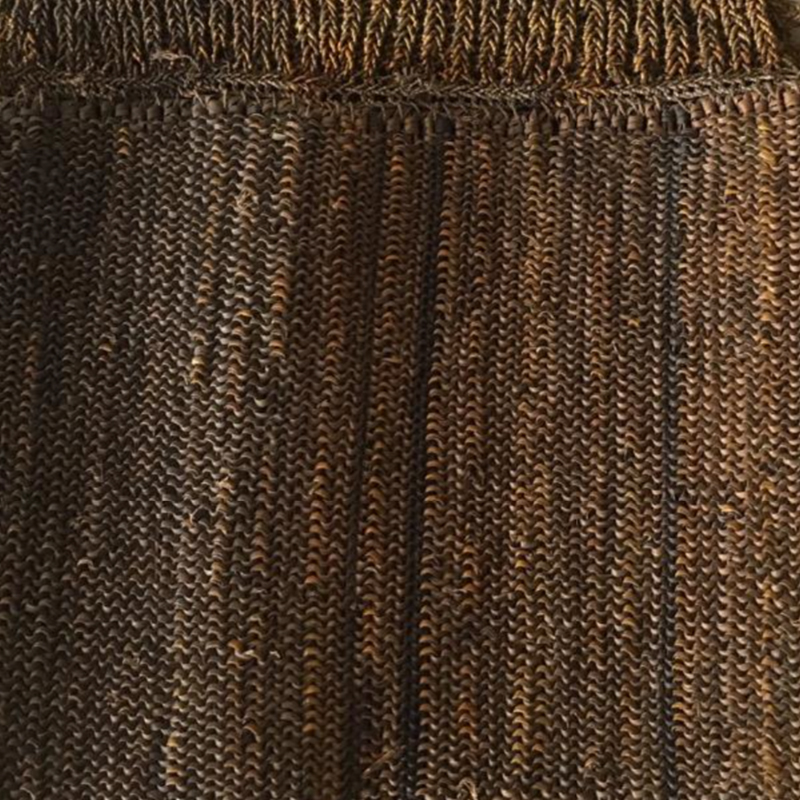 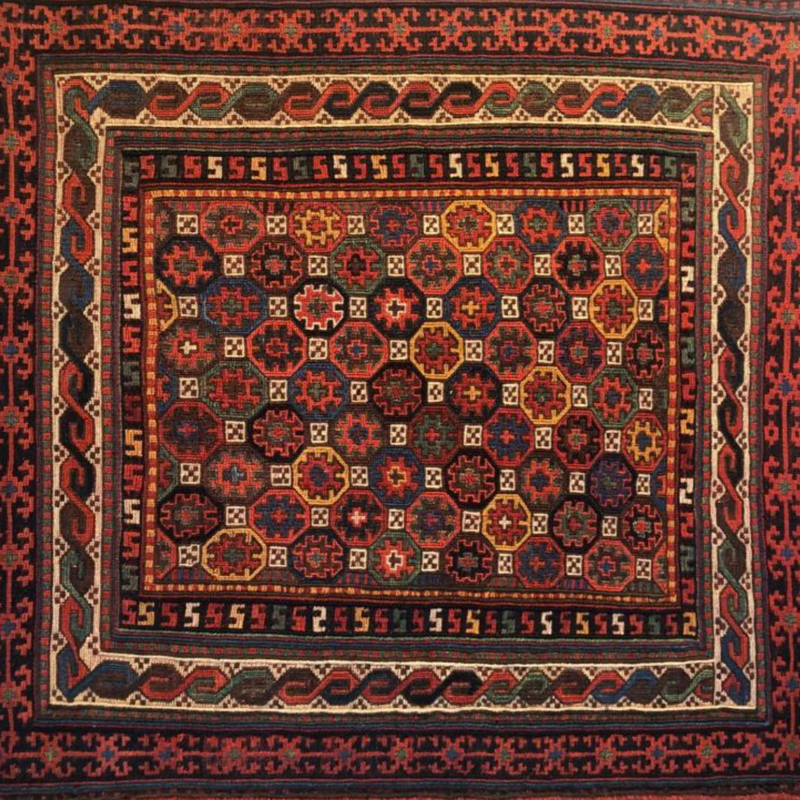 A piece with a very similar design at its centre appears as plate 29 in Robert Chenciner’s ‘Kaitag: Textile Art From Daghestan’, published in 1993 by Textile Art Publications.

Chenciner dates the example in his book to the 18th century or earlier, and describes it as having a mourning function. It makes one wonder whether his book had reached the village where you bought your piece, and the design had been copied from it. Or perhaps the design has survived the centuries through copying by successive generations from earlier examples.

1. This is a shoulder bag of traditional Kachin design with a continuous length of what appears to be indigo-dyed cotton cloth forming the sides of the bag and the sling shoulder strap. The sides of the bag are patterned with a design widely used by the Kachin. There is a drawing of a similar bag in ‘Burmese Textiles from the Shan and Kachin districts’ by Laura Start, published in 1917 by Bankfield Museum, Halifax. Figure 38.

2. This is a Bhutanese woman’s shoulder cloth, rachu, probably dating from around 1900. Such scarves are worn over the left shoulder. The red colour (here faded somewhat) the stripes, and the end patterning are characteristic. Today these cloths are much narrower.

3. These brightly coloured embroidered blankets or rugs are said to have been hand embroidered by Marsh Arab (Ma’dan) women on base cloths purchased from Kurdish people in Iraq. The rugs are used for marriage beds. They are made of two lengths stitched together along the selvedge. I think this example is glorious and if it were mine I would have it conserved. See Ruth Lockwood’s description: https://www.tribalcollectionscarpets.com/single-post/2017/09/09/Embroidered-Blankets-from-Marsh-Arabs-Ma%E2%80%99dan-of-Beni-Hassan-villages-of-Southern-Iraq She says that the finest collection of Iraqi embroidered blankets was assembled by Agatha Chritie. What happened to this collection she doesn’t say.

This garment would have been woven in the famous Bali Aga village (i.e. where older cultural and religious practices pertain than in most of the rest of Bali) of Tenganan Pegringsingan. The village is in Karangasem, East Bali. The kingdom of Karangasem had once ruled of parts of western Lombok, so the textile may have been used by Balinese there.

These textiles are woven with handspun thread using vegetable dyes in the double ikat technique (i.e. the pattern is tied into both the warp and weft threads for resist-dyeing before the cloth is woven). They are woven only in Tenganan, each part of the process taking place on an auspicious day and are used in sacred practices within the village’s extremely complex culture. But they are also considered to be powerful cloths in other parts of Bali. In some places they are used, for example, in tooth-filing ceremonies and funerals. The owners in Lombok may not, then, have come from the village. They would have kept the cloth for very many decades for use in ceremonies.

Cloths in this size and shape are worn by unmarried women in dances which they must perform a set number of times annually (the Tenganan year being somewhat different in length from the Gregorian year). They are wound round the body over the breast, with one end hanging down at the front as a ‘lamak’ or apron.

There is quite an extensive literature. I would suggest Brigitte Hauser-Schaublin et al. 1991. Textiles in Bali. Singapore: Periplus Editions as a good place to start.

An example of a similar cuirass, collected in the field in Irian by an American art dealer, Ron Perry, is, he says, woven from string made from the inner bark of a tree. The knotting uses variations on a continuous figure of 8 technique. The string is twisted as the work progresses. His examples have bands of different colours on the upper part of the vest are created from orchid vine wrapped around the central core of tree bark string. It is probably Asmat. See http://www.art-pacific.com/artifacts/nuguinea/shields/bdyarmor.htm

Alison should be aware of the forthcoming visit in July 2021 to The Green Collection at Brighton Museum. Here can be fould the pre-eminant collection of Burmese/Myamar which is mostly formed of items collected from there by Colonal Green. Alisons shoulder bag lacks some tassles which appear to have been stripped off at some point and originates in Kachin province in the north of the country.

1. The carpet in the wedding photo I believe to be from Tabriz, Iran. 2. Whilst ‘Camel hair‘ rugs occur less frequently. They are not unknown but are rare amongst rugs from Fars (SW Iran). To make a positive attribution I'd like to have known if the knotting is symmetrical or Turkish, which would confirm my belief that the carpet is made by one of the Khamseh confederation settled close to Shiraz. That is not so simple since the Arab contingent wove with Persian asymmetrical knotting but I don't think it is of the latter. It is not uncommon for Khamseh carpets to be described Qashgai but that more commonly known name is likely technically incorrect in this case.

Christopher Jeans The rug by the looks of things is a workshop piece staffed not necessarily by one particular group but woven in Shiraz (town). There are other examples of Shiraz workshop pieces the most famous of which once belonged to David Black with a differing colour range, seen on the cover of the Opie book mentioned. Another possible attribution might be Gashguli. Dating is most likely mid 19th cent, possibly third quarter despite what Opie says. NB - The LARTA Fair run by Aaron Nejad is now established at the January Battersea Fair, which itself was taken over by the late David Juran son of Alexander Juran and maintained by David’s widow. David’s widow generously donated some of Alexander Juran’s collection of books which raised funds for ORTS.

1. Tibetan rugs often took inspiration from Chinese textiles to make into rugs. A practice seen elsewhere in other cultures, say with Manchester cotton floral prints and Kashmir shawls. This is often the result of an admiration and sometimes because the weavers could never afford the real thing so the resources to hand make a sincere interpretation. In Tibet the use of costly imported Chinese silks is used in the margin of Tanka scroll painting in tiny strips to avoid waste and give maximum aesthetic bonus. The design on the blue rug seen here was used in Tang Dynasties and revived after. It also recalls Sogdian textiles of the period when the Tibetan Empire was at its height. 2. I believe that the smaller kilim may be from Romania but the larger pieces in the room setting is more likely local Bosnian.

1. What goes by the name Afshar are wonderful colour sumacs with several examples in the soon to be visited Paul Benjamin collection. There is a case however, for these to be known as Shah Savan. Originally these two pieces would have been woven in a single strip with intervening flatwoven sections and folded to construct a pannier bag or khorjian as correctly described. 2. The use of a preponderance of lak or insect dye silk is sometimes cited as a comparatively late feature in Tekke and other tribes' weavings. This small mafrash may have originally had a twin and would have had a plainweave backing. Ultra fine weaving with silk may be attributed to Merv. 3. It is less certain that this noble Baluch bag face had another to form a khorjian although more than likely. It would certainly have had a plainweave back. Possibly attributed to Adraskand on the Western border of Afghanistan with Iran. 4. Can't say much more about the suzani apart from it being very beautiful and the exact origin can't be precisely placed.

Navajo: A brief survey of the weavings of the Navajo

The Column Motif in Ottoman Court Prayer Rugs and Beyond